Known as “Turk” in the surf world, Mike grew up in Kailua, Oahu. He shaped his first surfboard at age twelve, later founding the iconic “Country Surfboards” in Haleiwa on the North shore with his partner, Mike Horack. It was the second surfboard shop on the North Shore (the first being “Surfboards Hawaii”, owned by Dick Brewer).

Though he owned Country Surfboards for only six years, Mike’s reputation as a master surfboard shaper was cemented. His shapes are still sought after and a few years ago one of his original boards (which unfortunately he no longer owned) went at auction at Blaisdell Center on Oahu for $10,000. See the bottom of this page for more info…

Mike surfed professionally for seven years and was the surfer photographed in the opening “surfer” shot on ABC’s “The Wide World of Sports.” He was also featured in a commercial for New Zealand Airlines, did a number of surf movies and appeared often in Surfer Magazine (charging Sunset Beach, Honolua Bay and Waimea Bay). And of course, the Banzai Pipeline, or “Pipe.”

Mike Turkington at the bottom of the tube, Banzai Pipeline, Oahu

Wide World of Sports
http://en.m.wikipedia.org/wiki/Wide_World_of_Sports_(U.S._TV_series)
The show was introduced by a stirring, brassy musical fanfare (composed by Charles Fox) over a montage of sports clips and accompanying narration written by Stanley Ralph Ross and voiced by McKay:

“ Spanning the globe to bring you the constant variety of sport… the thrill of victory… and the agony of defeat… the human drama of athletic competition… This is ABC’s Wide World of Sports! ”
“The Thrill of Victory…”
The melodramatic introduction became a national catchphrase that is often heard to this day. While “the thrill of victory” had several symbols over the decades, ski jumper Vinko Bogataj, whose dreadful misjump and crash of March 21, 1970 was featured from the early 1970s onward under the words “…and the agony of defeat”, became a hard-luck hero of sorts, and an affectionate icon for stunning failure.

Wide World of Sports was intended to be a fill-in show for a single summer season, until the start of fall sports seasons, but became unexpectedly popular. The goal of the show was to showcase sports from around the globe seldom, if ever, broadcast on American television. It originally ran for two hours on Saturday afternoons, later cut to 90 minutes. Usually, “Wide World” featured two or three events per show. These included many types not previously seen on American television, such as hurling, rodeo, curling, jai-alai, firefighter’s competitions, wrist wrestling, powerlifting, surfing, logger sports, demolition derby, slow pitch softball, barrel jumping, and badminton. Another memorable regular feature in the 1960s and 1970s was Mexican cliff diving.The broadcast was hosted for most of its history by Jim McKay.

“Pipeline” surf break on Oahu:
The Banzai Pipeline, or simply “Pipeline” or “Pipe,” is a surf reef break located in Hawaii, off Sunset Beach Park in Pupukea on O’ahu’s North Shore. A reef break is an area in the ocean where waves start to break once they reach the shallows of a reef. Pipeline is notorious for huge waves which break in shallow water just above a sharp and cavernous reef, forming large, hollow, thick curls of water that surfers can tube ride. There are three reefs at Pipeline in progressively deeper water further out to sea that activate according to the increasing size of approaching ocean swells. (Wikipedia).

If you are an avid surfer or collector and interested in a board shaped by Mike Turkington, you may contact him through this blog. 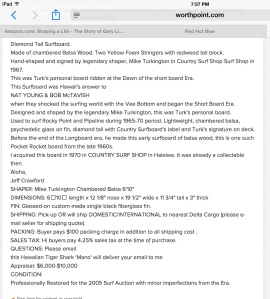