As I told you in my last post, we took a Staycation to the Wailea Marriott on Maui this past weekend. Here are a few things we spotted on our morning walk: 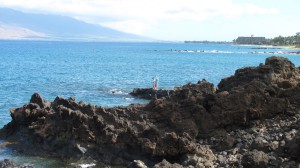 It is so evident here that Maui is just one big hunk of lava. This is facing the West Maui mountains. Then there were these guys out enjoying a stand-up paddle: 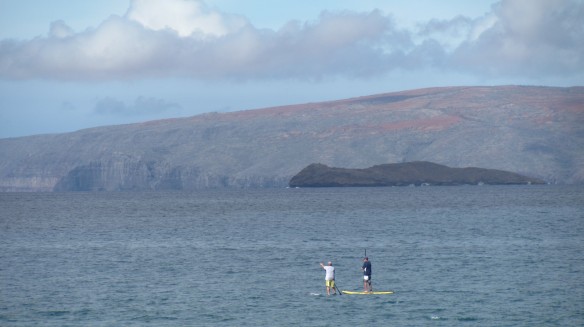 That is Molokini crater behind them, the one that is shaped like a horseshoe, though you can’t tell it from here. It’s good they were out there early, because shortly after this the wind came up and it felt like a hurricane was coming. We exited poolside and headed back to our room. On the way we passed the other two pools at the Marriott, the ones for kids and families: 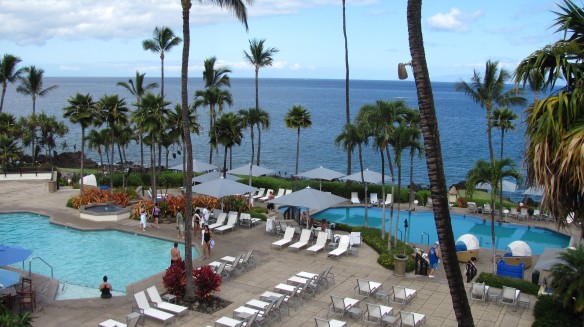 As far as Staycating, there is a poolside bar and grill here that charges $18.00 for a hamburger. That is simply not in the budget. Knowing this, I shopped then packed a cooler and food for the room. I took everything we would need for breakfast and lunch, plus drinks, snacks, etc. It was a pain to get it all together, but I kept my eyes on the prize: no credit card bill for anything other than dinners out.

I also challenged myself. What would my favorite Food Network chefs do to keep it interesting? I packed a breakfast basket, lined with a good linen napkin, and added Biscotti, and small jars of regular and decaf Kona coffee. I got fresh bluberries and papayas, and blueberry muffins. I put organic yogurt in the cooler, and packed nice small china bowls to eat it from. The point was to not feel cheated by eating in the room, making things pretty and interesting.

I also discovered the beauty of small party trays at Safeway. Instead of having to haul along all the fixings for sandwiches, I got the tray, which had individual packages of crackers, cheese already cut into bite-size pieces, and the honey ham was shaped into small ovals (I don’t want to think about how they do that). All I added was a teeny jar of mustard and a knife. Also a five-layer bean dip, already in a nice sized tub, and blue corn chips. Hummus. Spiced almonds. Things we could eat in the room or take down to the pool.

All in all, it was a lovely time. And we didn’t have to pay the prices at the bar because I’d gotten a nice bottle of Veuve Cliquot Ponsardin at Costco and carefully wrapped champagne flutes in the linen napkins and put them in the basket. I really like the looks of that bar, though. They did a nice job: 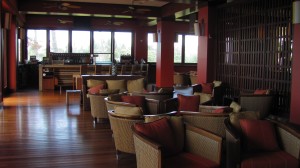 FYI: We’ve heard some disappointing things about the “Mala” Restaurant on site, such as bad service, long waits and the food not great for the price. If anyone has had a good experience there, let me know.  It’s a shame because Marc Ellman and his wife Judy own Maui Tacos (nine locations), Penne Pasta in Lahaina and Mala Ocean Tavern in Lahaina. http://malaoceantavern.com/markellman.html Though I find Mala in Lahaina overpriced, the food is good and it sits right on the water. Not so the “Mala” at the Marriott, and it’s curious to me since ownership includes Clint Eastwood and Alice Cooper. Does anyone know if Clint still owns the Hog’s Breath Inn Restaurant in Carmel, California? I loved my dinner there, so cozy with the cool temperatures, yet the fire was blazing outside on the patio…

Okay, I admit it’s been really hot here on Maui and I’m daydreaming of being nice and cool somewhere…

Thought for the day: Apprearances can be deceiving. Riches can be temporary. Look for someone who makes you laugh because sometimes that’s all you’ll have to brighten a dark day. That laughter will make your heart sing.

I have someone who makes me laugh every day, and I am grateful.