Today this blog is coming to you from the North Shore of Oahu: 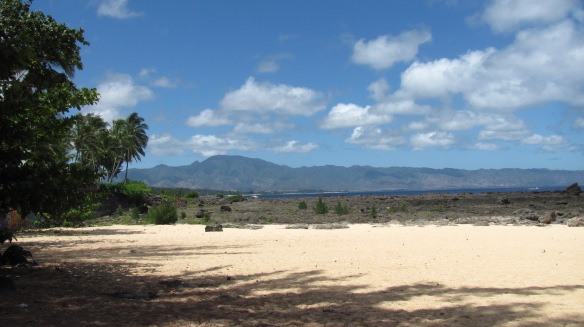 Always when we get to Mike’s Mom’s North Shore house, I am struck by how moldy everything is. When a house is a half-block from the beach, there is salt spray, then dirt and mold grows on top of that .Also, the house sits in the trees 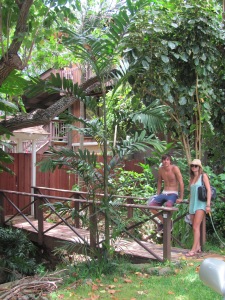 which keeps it cool, but the mold likes that even better. If no one has been here in months it can take a week to clean it all, easy (the geckos think they own the place, and gecko poop is like cement) but the beauty of having the beach a half block away usually makes it all worth it. I love this beach because it has trees that overhang it. 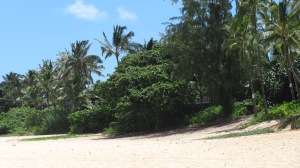 Someone told me when I first moved to Hawaii that Hawaii is best done in the shade. I thought they were crazy. Now I crave the shade, especially after having a suspicious spot removed twice from my nose. One friend calls living in Hawaii the “20 year skin-cancer plan.”

Last night there was a wedding at the beach. The groomsmen all wore long-sleeved white dress shirts with khaki pants which they rolled up to keep them out of the surf and sand. The bridesmaids all wore bright yellow sundresses. The ringbearer, who was about three years old, also had a white long sleeve shirt, khaki pants and a teeny tiny yellow tie that matched the sundresses. It appeared to be a destination wedding but where were the parents? There were no parents or grandparents in evidence. To me that is not a wedding.

One of the things I love about the North Shore is a hike in the mountains where I rarely see anyone else. A problem on Maui at times is that it has become so overrun with tourists. When you vacation on Maui it is not so obvious, but when you live here and have guests and want to take them hiking, it’s frustrating.

In the same way that Maui has many different personalities each island has a distinct personality. So within Oahu are many different personalities also. The North Shore is determined to retain its laid-back charm. The motto here is “Keep the Country country.” Currently there are plans to build an old-style hotel in downtown Haliewa. If you Google photos of Haliewa, the old hotel on the river was spectacular. Andy Anderson wants to re-create that, however the locals want a Beachpark and restrooms. I don’t live here; who am I to say who is right or wrong?
It is easy to get worked up about issues like this on Maui but as a tourist to a Oahu, it doesn’t affect my day-to-day life. Isn’t this true no matter where you live?

I would say in all the years I’ve been coming to the North Shore, the biggest change has been the traffic, it used to feel like the Country, and the traffic was in “town.” But that was BTB: “Before The Book” that changed everything. In Maui, it was “Maui Revealed“, then the other islands got their own versions. At my job we called it “that damn book”, because it gave every last secret away…every hiking spot, every waterfall. It made the locals crazy, there was no place left for just us. On Oahu they must have written about the turtles on the North Shore, because the tourists swarm the spot on the highway where the turtles are on the beach, darting across the highway at every point helter-skelter, and tying up traffic into an irritating snarl. What should be a ten-minute trip into Haleiwa Town becomes 30 minutes or an hour…just what we want to do on vacation. Then winter comes with the big swells, and more traffic from the surf contests. There is no escaping it now
I am here, resting and playing and hiking…and sitting in traffic. Not the North Shore we all used to know.

Thought for the day: All intellectual improvement arises from leisure.