For the past two weeks, Maui Time Magazine www.mauitime.com has run articles in regard to the practice of burning sugar cane on Maui. Until you live here, you just can’t imagine how the cane burning and its attendant smoke can affect you. This taken from my back porch:

One physician’s (a radiolgist) letter to Maui Time is excerpted here:” I am in excellent health and am not sick…yet I have been coughing non-stop today. As my windshield was covered with cane ashes this morning,  I assume that my cough is due to cane burning…particularly disruptive as my job as a radiologist requires me to dictate for approximately nine hours per day…if I can’t do my job effectively I may have to move. If I move, it will likely be out of Hawaii. I live and work in Kihei.” He goes on to say that he was talking to retirees who spend part of the year on Maui, and they stated that the smoke made them cough and “feel lousy.” They were discussing not coming to Maui as often, because of it.

The radiologist wraps up his letter with: “I have two small children and although I love otherwise living on Maui, I feel irresponsible as a parent to continue to subject them to forced inhalation of cane smoke. I hope that those in charge of making decisions regarding the burning of cane on Maui also feel some responsibilty to care for the health and welfare of it citizens.” Please note that Hawaii has the highest incidence of asthma in the country, which particularly affects children, and early on.

I took this photo of sugar ash by a curb in Kahului. Imagine what that does to your lungs! It is greasy, tarry and sticky, so it sticks to your car, your porches, your garbage cans, and your walkways at your home.

Maui Time states “Maui’s fight over sugar cane burning gets even hotter.” The truth is, there isn’t much of anything that gets Mauians more fired up than the cane burning and its smoke. This past week it lead to a woman having rocks thrown at her and being called a “Haole *%@^” when she wound up on the wrong side of the street during a planned sugar-cane rally! The opponents were employees of HC&S, which employs 800 people. A recent petition, circulated to stop the burn, garnered 8,000 signatures.

HC&S burns 400 ACRES of cane per year, which comes out to about 70 acres per day (roughly the size of Disneyland.) Try as you might to think you can escape it, if you are out and about, your are breathing it. Also,many Maui people don’t have air-conditioning (they didn’t move to Hawaii to live in sealed boxes) but with the cane smoke, are forced to keep their windows closed and as one woman put it “to circulate the smoke already in the house.” (My experience is that even with the windows closed, some smoke seeps in.)

A woman with the initials A.I. wrote: “Today my daughter is home sick , after weeks of burning (the accumulative affects that her immune system just can’t handle indefinitely)…she has been home bound all weekend and her asthma is too bad for her to go to school.I am an independent contractor, and I don’t get sick pay when I stay home with my children.” She ended with:

“It may cost HC&S profit to change their farming practices, but think of all the other businesses that won’t be paying sick leave due to cane-related illnesses.”

And what about health care?

I personally am one of the people whose asthma is aggravated by the smoke. I did not have asthma before moving to Hawaii. We are fortunate if our trade winds blow the smoke out. If the trades are down, this is what we look at and breathe for hours: 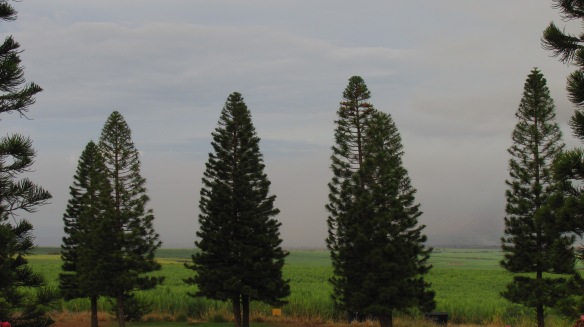 Another piece of the puzzle to think about, when you’re wondering what it’s really like to live in Paradise.