This is where I spent the weekend. Nice? It’s the Wailea Marriott on Maui. http://www.marriott.com/hotels/travel/hnmmc-wailea-beach-marriott-resort-and-spa/. Check out their website for great photos. Anyway, it took me years to convince Mike that there was any value in staying at a hotel on Maui when we already lived on Maui. In fact, he flatly refused to spend the money. So that left me bereft for the days when I used to come to Maui to vacation and just reeellaaaaxx.

In his defense, his parents had a home on the North Shore of Oahu near the beach and we used to go over there about three times a year, so I did have a getaway. Then a few things happened to knock the stuffing out of vacationing over there: Aloha Airlines went belly up and took all of our hard-earned points with them. No more free flights. Grrrr. And what used to be a $25.00 flight interisland became a $50.00 flight, then a $70.00 flight. Mesa  Airlines http://iflygo.com/ started the airline wars in Hawaii and they are the only ones who won. The people who live here can’t afford to “go interisland” anymore because a round-trip is now $160-$190 depending on the time of day. Times that by two people, and suddenly a Staycation was more in the budget than a flight. Mike said yes! Especially after his bout with blood poisoning…he knows I’ve been up to my a%* in alligators around here for a long time. We both were in need of a break.

I chose the Marriott for a number of reasons. Most of all, their Infinity pool

is to die for, and the best part is, it’s kid-free. They don’t call it the “Serenity Pool” for nothing. Also the Marriott is very small in comparison to say the Grand Wailea http://www.grandwailea.com/ or The Fairmont Kea Lani http://www.fairmont.com/kealani/. We took the walking path in Wailea, which is another reason I love to stay down there (Mike can walk again, yay!) and went by the Grand Wailea. It was just wall-to-wall chairs by the pool all the way out to the pathway. Way too crowded for me. I love vistas and open space, but that’s not to say those hotels might not be perfect for you. Here’s the path: 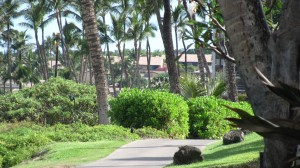 and also the tree in front of the Marriott on the path. What a great spot.

I used to attend the Maui Writer’s Conference every year here, but they did a major, very expensive overhaul since then. I remember taking my lunch and sitting under this tree when it felt like my brain was going to explode from classes (particularly the Screenwriting Retreat,where they basically locked us inside and wouldn’t let us out!) From that retreat though I met a wonderful writer and true friend, who is now a bestselling author: Graham Brown. http://grahambrownthrillers.com/ Start with “Black Rain” and work your way through. You won’t be disappointed. He’s just a stand-up guy and so humble, and the best part is, no matter how big he gets (co-writing with Clive Cussler now, ahem!) he still reads my scripts! Highly unusual in my business. Thanks, Graham!

Another reason I love the Marriott is it’s within walking distance of the Shops at Wailea http://theshopsatwailea.com/ and that means restaurants, and that meant we didn’t have to get in the car for three days. We discovered too late that there is cart that makes a loop to the hotel and back, which would have been nice to know. I can’t get enough of the Crab Bisque at Tommy Bahama’s Restaurant http://www.tommybahama.com/TBG/Stores_Restaurants/Wailea.jsp Actually, I take that back. I order the cup of soup because it’s so rich. A bowl is too much!

I will be sharing more with you more about this trip in the next couple of posts. People have written asking for restaurant reviews and hotel suggestions, so here you go. All from a local-yokel.